Inspired by The London Shipwreck: A Sunken Story exhibition on show at Southend Central Museum, Museum Officer Liam Reah delves into the murky waters of the Thames, to discover the shipwrecks hidden beneath the waves. Cannon from The London, in The London Shipwreck: A Sunken Story. Image courtesy of Tessa Hallmann and Southend Museums Service

Tragedies on the Thames

For hundreds of years the Thames has been one of the busiest rivers in the world, with countless ships passing through it since humans settled along its banks, yet there are hidden dangers within the waters.

The London Shipwreck exhibition is testament to the dangers of the sea, on display are objects from the 17th century warship, The London, that exploded in the Thames killing hundreds of people on board.

Within the London Shipwreck exhibition is an artwork by Adam Dent, The Museum of the deep: Shipwrecks of the Thames, on loan from Metal. This drawing depicts a map of the Thames Estuary and all the known shipwrecks that sank there.

This blog is the culmination of my research on the Second World War vessel HMS Vimiera and the paddle steamer the Royal Adelaide, two wrecks that sunk in the Estuary and sadly led to a high number of casualties. 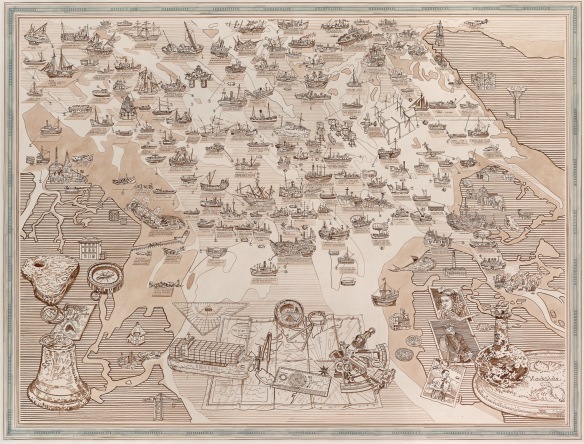 Adam Dant. The Museum of the deep: Shipwrecks of the Thames. On Loan from Metal. Copyright of the artist Adam Dant.

The HMS Vimiera was built in Tyne and Wear on June 1918, just a few months before the end of the First World War. Despite the war ending in November 1918, the ship managed to retain its commission and played a part in inter-War politics, by escorting Leonid Krasin and Victor Nogin back to the USSR after the first phases of the Anglo-Soviet agreement.

With the outbreak of the Second World War the ship was refitted with enhanced anti-aircraft and anti-submarine capability as part of the Naval Rearmament programme. The Vimiera’s became an escort destroyer and offered air defence during Dunkirk, as well as saving survivors from the doomed ship HMS Whitely. She also saw action at Boulogne, assisting the transport of almost 2,000 men between the 22nd and the 24th May 1940. It barely survived heavy air attacks, which saw other ships of similar class sunk.

The crew distinguished themselves during further attacks in August 1941 by rescuing survivors off the coast of Norfolk, shooting down three planes in the process. Sadly, the prestigious career of the HMS Vimiera came to a fatal end in January 1942, as she hit a mine on the Thames Estuary killing 93 crewmen leaving only 34 survivors. The Captain, Angus Mackenzie, was blown clear of the ship by the explosion and managed to survive. He may have escaped with his life, but he couldn’t escape his conscience, as his daughter Sheena Mackenzie witnessed:

“He suffered agonies over the Vimiera, he felt he lived while younger men died. He was bending over on the bridge patting Andy his Scottish terrier and he reckoned that was why he was blown clear. My mother made him take Andy to sea because the dog had a bad temper and was forever biting us – irony there! A boat was launched before Vimiera sank and it picked up those crew members not trapped below deck or killed in the blast including my father. The water was covered with oil. They recognised him by the tattoos on his arms.”

The fate of the HMS Vimiera had a long term effect on Captain Mackenzie. He clearly took pride in his role and cared greatly for those who worked under him, as it caused a huge strain on his mental state which was evident during his later commission on the HMS Liddesdale, when it was reported by his crew that, “The Captain was on the bridge practically the whole time when we were returning from Sheerness. On one occasion we heard the wail of pipes…The first Lieutenant said to me, ‘look over the bridge.’ There was the Captain playing away without any clothes on; he was naked. So our West-Country capable First Lieutenant took the captain gently by the hand and led him back to his cabin…After a rest he was perfectly okay and went back to full duty.’’

The bell that was on the HMS Vimiera when it sunk, was salvaged and was presented to the HMS Graham in 1956, as a memorial to the men who died on the ship. It remained on there for a long time, but was removed before the HMS Graham closed in 1993.

The RMS Royal Adelaide was a paddle steamer which was built in Bristol 1840. It was owned and operated by the City of Dublin Steam Packet Company. For ten years its most journeyed route was Dublin to London and it was a very popular journey, as the potato famine in Ireland caused a large number of Irish nationals to immigrate to England.

The wreck of the Royal Adelaide, 1849. From the Illustrated London News, 1849. Image copyright The National Archives. https://webarchive.nationalarchives.gov.uk/+/http://www.movinghere.org.uk/galleries/histories/irish/journeys/londonderry_3.htm

Tragically, on 31st March 1850, 250 lives were lost as the Royal Adelaide became shipwrecked on the Tongue sands near Margate. Flares were sent from the Royal Adelaide and were seen both by people stationed at Westgate and crewmen on a passing Tug boat called ‘The Nelson’ at 11pm. However the steamer only sent a couple of flares, so both observing parties believed the situation had sorted itself out. With hindsight, one would think it peculiar that they would ignore the flares; however ships often got stuck on the sands and were able to move off after a certain amount of time. Unfortunately, the real reason why they only shot up a couple of flares was because the ship had filled up with water at a rapid pace and they had to divert their energy to preparing the longboats for evacuation. It was discovered that the longboats left the ship, however the extremely volatile weather, which caused them to be wrecked in the first place, severely reduced their chances of survival and the longboats led them to their fate.

The Tugboat which saw what happened that night returned the following morning and discovered it had been far more serious than they initially thought. They realised that the hull had been stuck on the sandbanks and they were unable to move off. With the poor weather conditions and damage to the ship, they decided to act quickly to evacuate. Two bodies were found. One had letters and a memorandum on his person, while the other had a name written in his shoe. It was later discovered that one was the ship’s mate and the other was a crew member that worked below decks.

The Thames estuary has claimed many ships, but I have highlighted these two ships particularly because together they portray the interesting life a ship can lead both in wartime and peacetime. The huge loss of life also allows us an insight into the dangers both military and civilian ships faced when navigating the mouth of one of the busiest rivers in the world. One thing we can definitely learn from studying the Thames is that although Adam Dant’s depicts numerous shipwrecks, there are probably more yet to be discovered…

The London Shipwreck is open until the 20th of July 2019.

Southend Central Museum is open Tuesday to Saturday from 10am-5pm.